When you get a new car, you get a brand new engine that runs smoothly and efficiently, giving kilometre after kilometre of motoring pleasure. But over time, say a few years later, the engine does not have that sparkling quality which put a smile on your face at the start. Often you never realize it because it is very gradual but if you happen to get a chance to drive a brand new unit of the same car as your own, you may then notice how different the feeling is.

While ‘aging’ is a factor, what’s been happening over the years is the accumulation of deposits in places like the intake system, injectors, valves and combustion chambers. Tar-like, these deposits affect the flow of the air-fuel mixture and alter the combustion process to become less than optimum. The deposits are mostly by-products of combustion but can also come from the fuel itself.

To prevent these deposits from forming, petroleum companies have included additives (chemical compounds) in their fuel for decades. In fact, since the late 1940s, every litre of petrol sold at the pump in virtually all countries has contained up to a dozen different additives. Ongoing R&D has seen better additives being formulated every few years, providing more effective deposit removal and control.

BHPetrol’s Infiniti fuel, which was originally introduced in 2006, had had an advanced additive package which has been enhanced by having the maximum additive volume of 800 parts per million (ppm). This quantity is said to be double the amount recommended by the additive producer, with 800 ppm being the maximum as more than that would not make any more difference. It is because of the double dosage that the company brands their fuel with the 2x suffix.

As mentioned earlier, additive technology keeps improving and BHPetrol’s German supplier (a specialist in fuel additives) has come up with a new and more advanced additive which offers better performance. It is a fully synthetic multi-functional additive with two powerful ingredients – one to maximise cleaning of deposits and the other to minimise friction inside the combustion chamber (a friction modifier).

For want of a better name, it is called ‘Advanced Additive Compound’ (AAC) and whatever the previous additive package did, AAC does an even better job. To verify the more advanced performance, BHPetrol had its new fuel formulated with AAC tested and certified by an independent testing organization in Germany. Various tests of 60 hours each were conducted strictly following the CEC (Coordinating European Council) F-05-93 standard that is recognised in the international automobile industry. This test basically evaluates the cleaning performance of a fuel using a Mercedes-Benz engine.

The results: when compared to petrol without additives, BHPetrol’s new fuel with AAC was found to reduce deposits by as much as 94% to a mere 3 mg/valve. Such extensive deposit removal means that if the fuel is used regularly, it should help maintain the crucial areas of the engine in a very clean state, improving fuel efficiency and overall performance.

AAC also protects metal components in the fuel delivery system from the tank to the engine. Corrosion in fuel lines in inhibited and this not only ensures they last longer but also minimise rust particles mixing with the fuel. 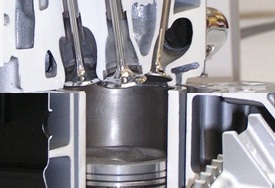 “It should be noted that many claims of petrol performance are based on tests that additive suppliers conduct using a reference fuel which may have different specifications from what is actually sold in Malaysia. In the case of our new fuel, we took the actual locally-formulated product and sent it to Germany for testing,” explained James Khoo, General Manager Retail of Boustead Petroleum Marketing Sdn Bhd (BHPetrol). “The way we have done it is assurance that whatever claims are made are 100% applicable to our fuel that Malaysian motorists buy.”

Not surprisingly, BHPetrol’s upgraded fuel is called Infiniti Advanced2x and it is sold in both RON95 and RON97 grades. Though the new additive does cost more, there is no increase in pump prices with this better fuel so RON95 costs RM1.85/litre and RON97 costs RM2.10/litre (subject to government regulated pricing).

“Yes, our production cost for the new Infiniti Advanced2x is higher than before and as prices are regulated by the government, we have to absorb the extra cost. However, we expect a 10% increase in sales with this new fuel and this increase should offset the extra cost incurred and even gives us some extra profit,” said K.T. Tan. Managing Director of BHPetrol.

“I’m confident that when motorists try our new fuel, they will feel a difference that they will like and keep coming back to our stations for more,” Mr. Tan said. And for those who try the new fuel between now and October 16, 2010, there’s even a chance they may win a Mercedes-Benz C200 CGI Elegance or one of over 700 prizes ranging from LCD TV sets to digital cameras, GPS units and holiday packages. To enter the ‘Infiniti Fever Frenzy Contest’ for these prizes, all you have to do is purchase a minimum of RM30 of the new BHPetrol Infiniti Advanced2x (RON95 or RON97) and fill out the entry form at the station (you should be in possession of BHPetrol’s e-card). Winners will be notified by telephone or postal mail, not SMS or other means of communication.